Whatever Will Jabar Laura Think of Next? 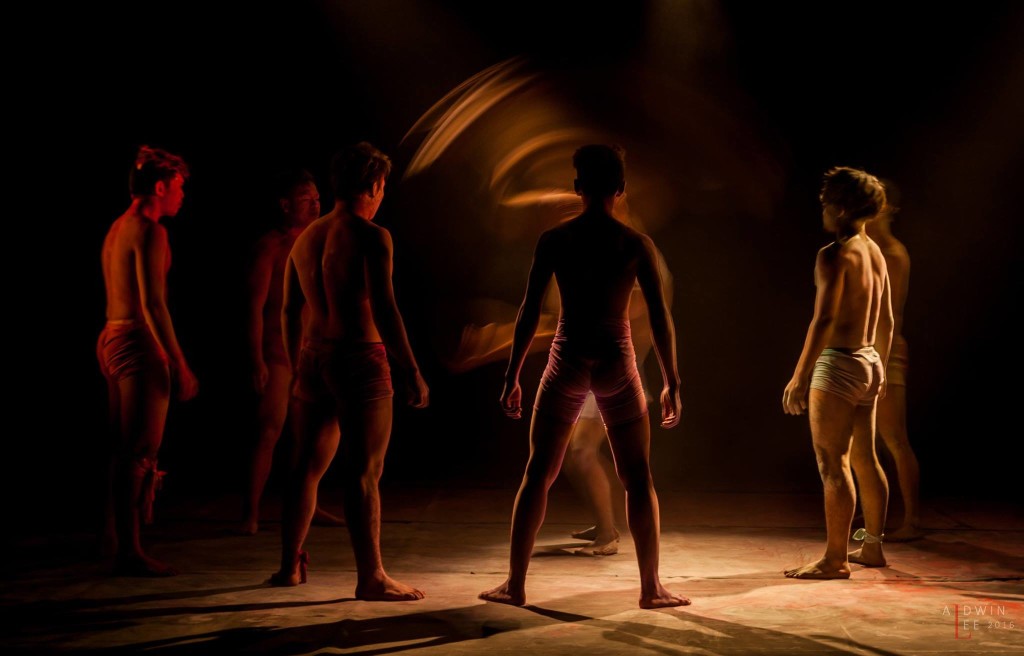 I first saw Jabar Laura’s work at ASWARA’s Gelombang Baru of 2013: it was a cheeky piece called ’Chop Suey!’ which had his dancers painted up in loud, solid colors, convulsing as if they were being ‘cooked’ in a ‘pot’, while a deafening alarm rang out, and ‘salt’ slowly fell from the ceiling to season the ‘vegetables’. It was a visual image that remains in my mind today, perhaps somewhat ruining the restaging for Jabar’s solo show, Shifting Winds, which features a collection of his most successful choreographies to date.

Not to say that the entire work was ruined by the stark memory of its premiere. Perhaps I only feel a little bit suckered that in the recent staging of ‘Chop Suey’ the ‘salt’ fell en masse on the ‘vegetables’ when it was released, as if the top of the salt shaker was not screwed on properly, therefore falling off and dumping all the salt along with it. The memory of the first seasoning, as it were, was so vivid because the slowly falling tiny objects could have been anything – snow, sand, rice, confetti – but as soon as you realise what it was and why it was falling, you chuckle and say to yourself, “Brilliant.”

Unlike some flash-in-the-pan choreographers who rely on cheap tricks to capture audience interest, Jabar is able to make compelling movement sequences that beef up the works considerably. So, it’s not all concept with Jabar, it’s a lot of dancing too. His ‘Dance Squad’ was first created for Short+Sweet 2014 on the ultra-precise beasts of Eximius Performing Arts School, and was a highly technical display of the skills of young ballet bunheads exploring contemporary dance technique. Although the current cast could use a little more rehearsal, it is clear that the choreography plays with military training motifs and marching patterns, but as they are executed by female dancers, they showcase sharpness and suppleness at once. 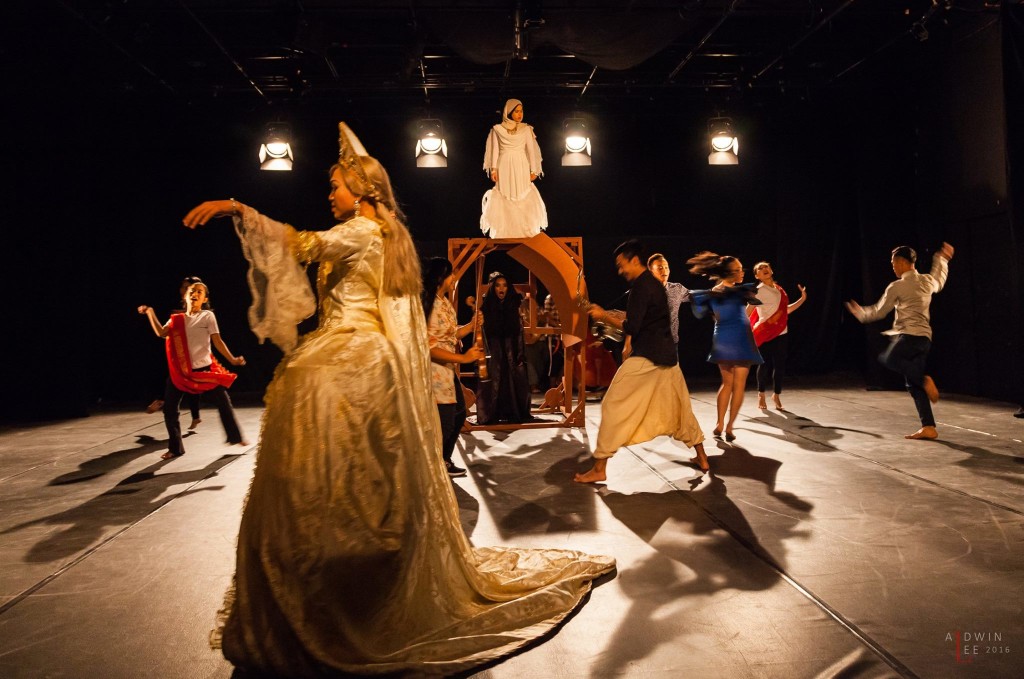 Of the three works that I had seen before, it is ‘Synecdoche’ that I feel has improved the most in its new staging. There are fewer people on stage, which simplifies the original ambitions of the work, and what they do simultaneously is easier to see, grasp and connect to the bigger picture. These ‘ordinary people’, both dancers and musicians, are seen circling the dual oracle in the middle of the stage: a white-clad singer on top of the box, and a black-clad dancer inside, who spends the entire work with her mouth open, as if screaming the song that is being sung live outside her prison. I see this circular pattern as life going on regardless of our victories and pains, regardless of political affiliations, social status and gender acceptance/rejection, regardless of good and evil, represented by the singer at the top of the hub, and the dancer beneath her, although which persona is good and which is evil is cleverly left to the imagination of the viewer.

Despite the smaller cast, the work still builds into a chaotic frenzy, then inevitably falls apart, as life tends to do. After the briefest of blackouts, the chaos is in order again, with the various characters lined up in windmill lines around the hub, circling slowly again, life going on.

Most choreographers develop a style of movement that they always use for their work, but Jabar seems to challenge himself to widen his choreographic vocabulary. His signature happens to be his inventiveness. Each work in Shifting Winds has a unique concept or catch that makes the work memorable, but the cooking vegetables move differently from the high marching, high kicking de-fatigued trainees, from the plethora of ordinary people moving clockwise, from the Bajau natives sending off a newlywed couple to their new life together, from the hipster clubbers who don’t know the word ‘moderation.’ In ‘Facing the Future’, which plays with movements from the Bajau Samah community’s traditional dance, kuda pasu, it is not the way he presents these explorations that is memorable about the work, but how the lone female dancer, Chong Hoei Tzin, never touches the floor.

The final work, ‘Melancholia’, could have been just a mess of ravers bouncing around under strobes but their organisation as a mess does not go unnoticed. The line of dancers counterpointing movement against each other is quite clever and mesmerising, and the gradual blurring of sharp lines into psychedelic, buttery, ridiculous states happen so fluidly that it is difficult to pinpoint where the drug ‘kicked in.’ There also seem to be moments of audience participation, or rather points where the audience is made to feel as if they are part of the dance. The first was when the dancers were gathered together upstage centre, deftly moving forward, most of them in their supposed altered state, giving the impression of an attacking mob and making one feel the urge to get up and run. The work ends with the dancers crossing the fourth wall and stepping into audience territory, slow-motion dancing with the audience members in the front rows, looking quite eerie and undoubtably melancholic under relentless strobe lights. Instead of running, you are glued to your seat, waiting for them to reach out and grab you, crush the air from your throat, the life from your chest. Then, the lights black out.

And before you start clapping furiously, you first let out a sigh of relief and chuckle, “Brilliant.” 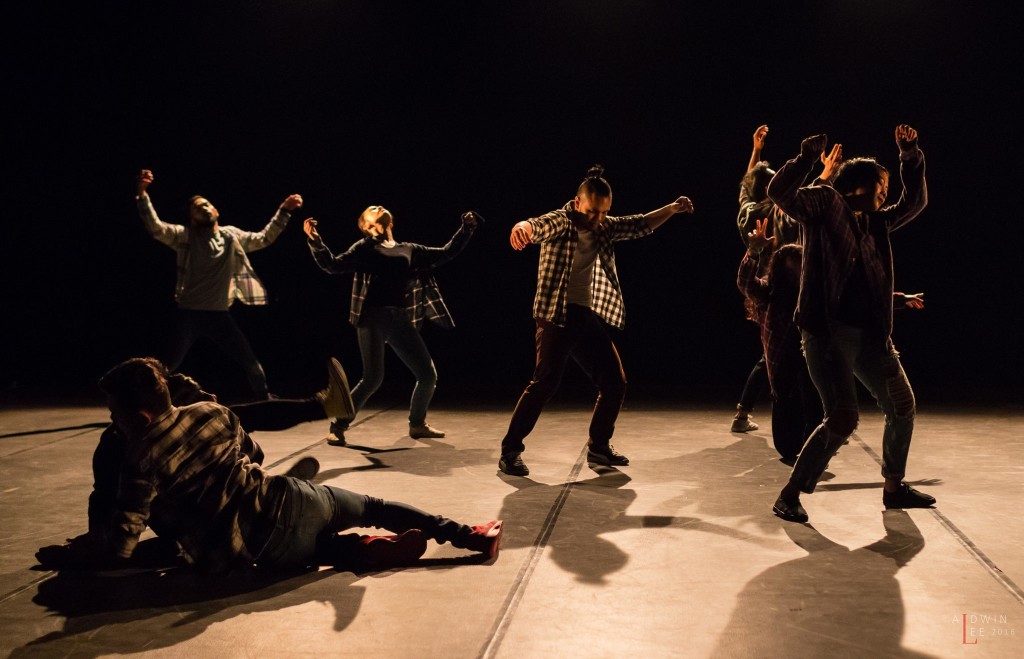 All photos by Aldwin Lee.